The Central Coast Fly Rodders' (CCFR), was formed out of a discussion on the Internet between a couple of Fly Fishos who felt that it was time that the Central Coast area had it's own fly fishing club.

Previously the only fly focused  clubs within the reach of the Central Coast were in Newcastle and Sydney, which meant members could not be as actively involved as they would like due to the travel. One of the people involved in this discussion (David Witham) took the lead and gauged the interest in having a fly-only club.

The interest was bigger than anticipated, so a meeting was organised for the club to get started. The first meeting was held on the 2nd of August 2001, and saw 16 fly fishos attend from all over the coast.

By June 2004 the club had grown to nearly 40 members and was officially incorporated.

2011 marked ten years for the club, still as a thriving group with trips as diverse as the species targeted.

In past years members have fished as widely as Mongolia, Africa, Florida, The Cook Islands and New Zealand, catching a range of species from taimen and tarpon to bonefish and trout.

Locally we have fished favourite locations such as Broken Bay, Oberon Dam, Lake St Clair and Swansea for species that have proven as fun to catch as the exotics – trout, kawahai, flathead, drummer, bass and bream. 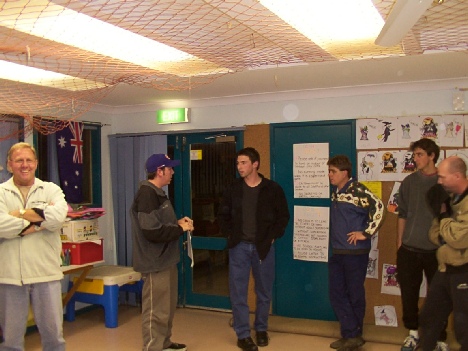 The CCFR Meets monthly on the first Wednesday of the month with the exception of January. Meetings are held at the Kariong Neighbourhood Centre, 10 Langford Drive, Kariong from 7pm.

The Central Coast Fly Rodders’ main obejective is to promote and further the sport of fly fishing and fly tying. in a friendly and social environment.

We fish both salt and freshwater and our members travel extensively and share their experiences with our members. We are a non-competitive club which fosters the sharing of locations and techniques across our group.